Then & Now: Your Welding History Timeline

It's national welding month! Forney would like to celebrate by looking at welding's extensive history, and rich future.

The History Of Welding- A Basic Timeline

Bronze Age
You can thank our ancestors from the Bronze Age for the earliest forms of welding. It all began with small gold circular boxes that were made by pressure welding lap joints together. A lap joint is formed when 2 pieces of material (usually with differing thickness) are placed in an overlapping pattern on top of each other. During the Bronze Age, they shaped metal into jewelry, dining utensils and even weapons. 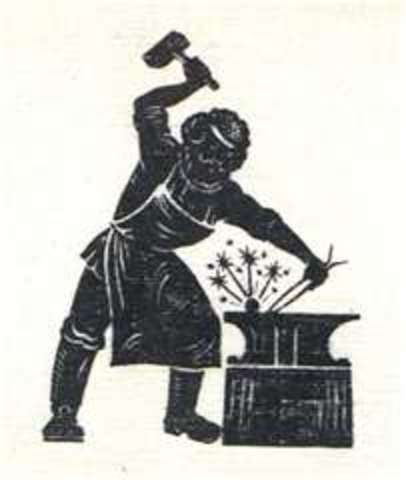 Iron Age
During this period, Egyptians and people in the eastern Mediterranean area learned how to weld iron together. They did this by using charcoal-generated heat to turn iron ore into sponge iron. This process was also used to make weapons.

Medieval Era
During the Medieval Era, welding became especially important. In Europe, noblemen were expected to maintain warhorses, iron armor and fine blades (weapons, weapons and more weapons). These expectations led to the very first blacksmiths— elite tradesmen who understood how to use heat to create fine metallic items. This was a crucial skill that made blacksmiths respected members of society. 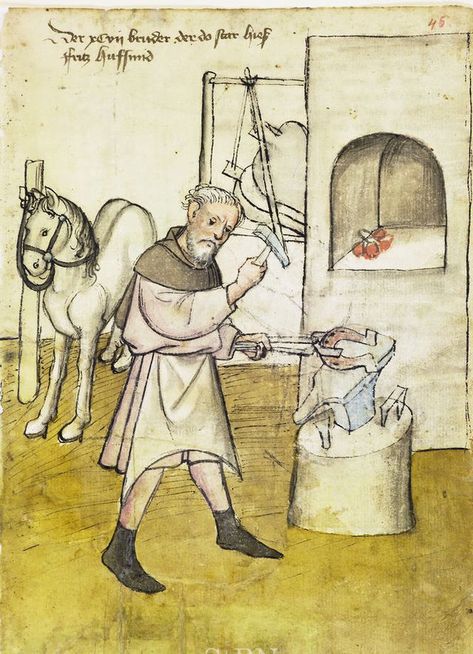 1800s
Edmund Davy of England was a professor of Chemistry at the Royal Cork Institution and Royal Dublin Society in the early 1800s. In 1836 he was credited with the discovery of acetylene, a colorless gas that is widely used as fuel as well as a chemical building block (commonly used in gas welding).

In the same era, Sir Humphry Davy is credited with the production of an arc between two carbon electrodes using a battery (otherwise known as an electric arc). During the same time, the electric generator was invented and arc lighting became more popular.

Towards the end of the century, gas welding and cutting were developed.

In addition to these advances, C.L. Coffin of Detroit was awarded the first U.S. patent for arc welding using a metal electrode. This was the first record of a successful weld made by the metal melted from an electrode carried across the arc to deposit filler metal in the joint.

1900s
In the early 1900s, Great Britain's A.P. Strohmenger and Oscar Kjellberg introduced a coated metal electrode. Strohmenger used clay and lime coating to stabilize the arc, while Kjellberg dipped iron wire into mixtures of carbonates and silicates to coat the electrode. Unfortunately, the high cost of these electrodes prevented them from being very popular. However, their hard work contributed to the development of Shielded Metal Arc Welding, more commonly known as Stick welding.

Resistance welding became a practical process during this time thanks to Elihu Thompson who originated this joining process. With that advancement came the developments of resistance welding processes like spot welding, seam welding, projection welding and flash butt welding.

During this time, gas welding and cutting were improved thanks to the production of oxygen and the liquefying of air, along with the introduction of a blow pipe/torch in 1887. Before 1900, hydrogen and coal gas were used with oxygen, but the early 1900s developed a torch suitable for use with low-pressure acetylene.

Of course, we can’t forget to thank World War I because it brought an astounding demand for manufacturing. More advanced development of welding machines and electrodes became pertinent to meet the demand. Up until this period, acetylene welding was the most popular. That popularity was soon replaced with arc welding machines.

in 1932, James Donovan Forney invents a revolutionary new product and calls it “The Forney Instant Heat Soldering Iron”. Forney continued his success in 1936 when he invented and produced the first successful 110-volt/ 125 amp and 110-volt/ 150 amp welders.

Around the same time, big names in welding such as Hobart, Lincoln, Forney Industries and Miller began to rise in popularity.

In the 1930's electric arc welding became a more common process used in the United States. However, the 1940s introduced two revolutionary processes; gas tungsten arc welding (GTAW) and gas metal arc welding (GMAW), however it took a while for these processes to gain popularity.

After decades of development gas tungsten arc welding (GTAW), widely recognized as TIG welding, was finally perfected by Russel Meredith and patented in 1942.

In 1945, the Rural Electric Associations (REA) began delivering 230 volt service to farms and ranches. The Forney Industries sales staff gained permission from the REA to climb utility poles to connect welders for demonstration, and as a result Forney welders add metal repair and tool hardening to farmer's capabilities.

in 1948, the gas metal arc welding (GMAW) process was successfully developed at Battelle Memorial Institute under the sponsorship of the Air Reduction Company. This development utilized the gas shielded arc similar to the gas tungsten arc but replaced the tungsten electrode with a continuously fed electrode wire. After more development, this process would become more commonly known as MIG welding.

The 1950's were crucial years for the development of a flux-cored arc welding process (FCAW). This process allows self-shielded wire electrodes to be used with automatic equipment, and as a result welding speeds were greatly increased. In this time, plasma arc welding  and cutting was invented and patented in 1956 by National Cylinder Gas Company.

Modern Welding
Since the early 2000s, welding has become an even more valuable skill and sought-after trade. The world has seen a substantial increase in the number of welding processes, and metalworking specialists are constantly researching ways of creating more. Although more processes are being developed, the most popular processes continue to be Stick, MIG and TIG welding. Plasma cutting is also a valuable skill to master, and when paired with welding it can take a piece to the next level.

In the automotive industry, welding aluminum has gained popularity. Although it's a more complicated material to weld, it is lighter than steel and can be just as strong. Laser welding is one of welding’s newer processes. The laser was originally developed as a communication device, but the enormous amount of concentrated energy in a small space proved to be a powerful heat source. It can now be used for cutting metals and nonmetals, especially in automotive metalworking operations.

Welding machines are getting more technologically advanced, however welding has never been more simple. This can be attributed to the rise of "do-it-yourselfers" (DIY). It's now easier than ever for someone to learn to weld. Recently, Forney Industries developed the Forney Easy Weld line of machines. These welders and plasma cutter take the fear out of welding, and make it simple for just about anyone to produce quality welds.

Future Welding Trends
Welding operations must be completely integrated into agile manufacturing processes and control schemes. In addition to this, welding engineers will develop new materials and adapt existing materials to be welding into world-class, fabricated products.

It is hypothesized that welding will continue to become even simpler, in turn making metalworking machines more advanced. The competition among other welding companies to create more user-friendly and durable machines will drive advancements. You might also see a rise in more exotic materials, specifically in Aerospace engineering.

Electron-beam welding will push to the future. This advanced form of welding is excellent for joining dissimilar and hard to weld metals.

Whichever way you look at it, welding has always been an important trade. Thanks to past and present welding technicians and engineers, it seems that welding has a rich future ahead. If you're interested in learning how to weld, or you just want to know more about the trade there are tons of resources out there to get you started.

For a great welding dictionary, check out this link courtesy of weldingtech.net.

Forney Industries would like to thank the following for information included in this blog:

SEARCH FOR BLOG POSTS ABOUT: